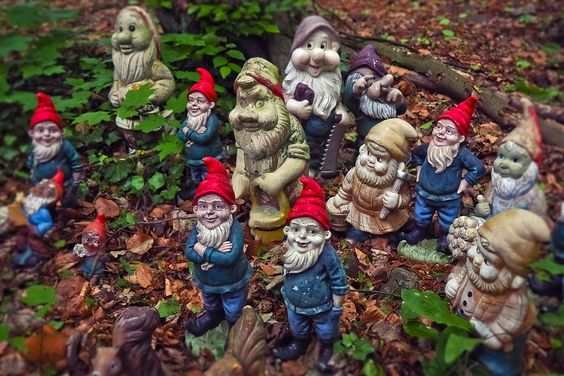 There was a meeting of the gnomes one night. They were talking about the “Tall people.” They hadn’t noticed them around as much, and were wondering what had happened. Usually they were busy hiding from them during the day, as their big feet traipsed through the woods and meadows. None of them wanted to get stomped on. There were some brazen gnomes, who bragged that they weren’t scared of no funny “tall people”and they wouldn’t hide. They would get right in the path of the “tall people” and sadly some of them were never seen again.

“Have they gone away?” one young gnome asked.  “Why haven’t we seen them?”

“They haven’t totally disappeared, for I have seen some of them. Though they are usually alone now or else with just one other person. Haven’t seen groups of them. They were always easier to hide from before,  for you could hear them coming. ” said an older gnome as he stroked his beard.

“I had a real close call last night.” said Hermie,  “I got away from a big foot right in the nick of time. One of the “tall people” were out with their camera taking pictures of the sky.”

Little Jubi spoke up, “Well I almost got stepped on during the day when a “tall person” was out walking their dog. The dog was really big, and I thought for sure I was a goner.

“I am sure they all will be up and out again in a bit. Perhaps they are just taking a break for now.” said one.

They all shrugged their shoulders, for no one really knew what had caused less “tall people” to be out and about.

“I am sure they will be out and about once again in time, we can’t let our guard down. Though I am wondering if they are starting to go a little crazy.” said Kiki

LuLu laughed, “Starting to go crazy….I think they been crazy for awhile!” The others joined in her laughter.

“True! But the other day there was one really “tall person” traipsing through the woods and he was talking to himself. He was saying how he was going to catch a unicorn! Silly guy! Those unicorns are smart, they won’t let themselves be seen by “tall people.” ”

All the others agreed.

“Well we could spend all night discussing the crazy things about the “tall people” and we still wouldn’t figure them out.”

They all agreed and they went back to watching the stars, chatting with the fairies and watching the unicorns dance.

Little Hermie wondered as he watched, what do the “tall people” do to relax? Whatever it was, he didn’t think it could compare to watching his favorite fairy dance. He smiled, as he caught her eye and gave her a wink, underneath the moonlit sky.