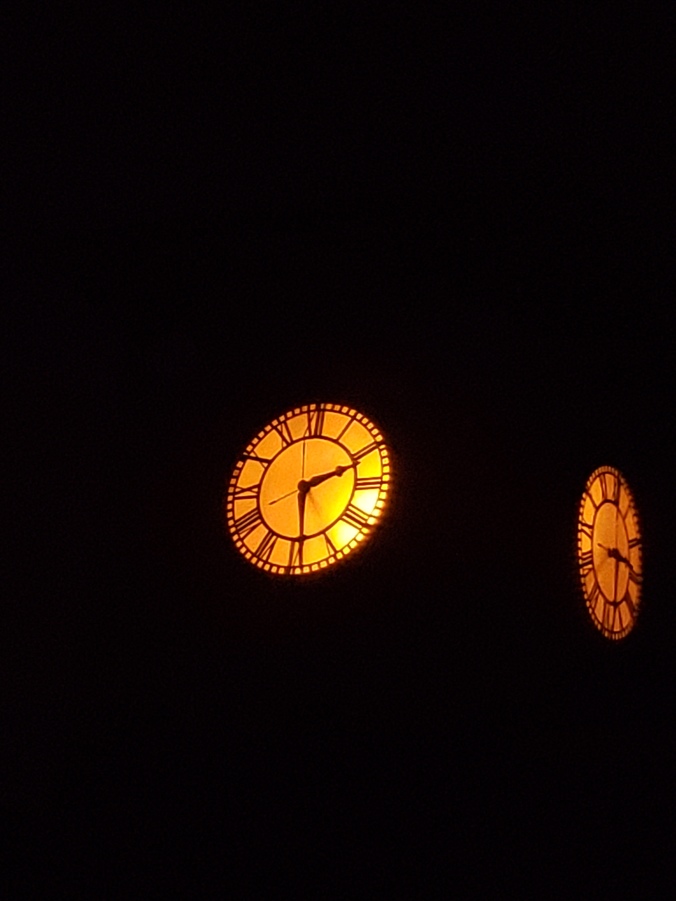 Somewhere between here and Vancouver.

I woke up because the rocking of the train stopped. I looked out my window. We were stopped at some train station and the light from this clock was shining straight into my window.

Meet me at the Clock

The house was silent as she crept down the stairs. Her heart jumped when she heard the sound of the Grand Father Clock chiming. She had forgotten about that clock. While it was chiming she quickly ran down the stairs and out the front door.

It was still warm outside for it had been such a hot and humid day. The night was very dark. She was glad for street lamps that were lit, for the silvery moon wasn’t putting out much light, as it peeked out from behind the clouds.

Tamara hoped she was going in the right direction. She had tried to listen hard to the directions Timothy had given her, but her mind was going in a million directions as he talked. Were they really doing this? She was excited and nervous at the same time. What would her parents think?

She had tossed and turned every night this past week wrestling with the decision.  As far as she saw it, she had no other choice. Her parents wouldn’t let her marry Timothy and her heart just couldn’t stand being separated any longer from him. Tears had fallen upon the letter that she had left for her parents to find once she was safely gone. She hoped they would forgive her in time. Hoped that they would come to see that she and Timothy truly did love each other.

Her legs were beginning to get pretty tired, she hoped she would be there soon. Timothy had said to look for the light of the big clock shining from the train station. That it would show her the way to him and once she got there, they would never have to be separated again.

Ahh! There it was, her heart started beating faster. She felt a burst of energy overtake her as she ran to the station, opened the door and walked in.

Seeing Timothy standing there, she fell into his arms. ” Timothy … I love …” She stopped abruptly as she saw something out of the corner of her eye.

“Hi Tamara”, her Mom put a arm around her as her Dad put his hand on Timothy’s back, leading them out of the station.

“How about I whip up a batch of my special pancakes. We can enjoy eating them as we have a nice, long chat.” her Mom said.

“I think that sounds great honey! Perhaps some of your great biscuits too, with a big pot of coffee.” Tamara’s Dad replied.

“You like your coffee strong and black, son?” Tamara’s Dad asked Timothy.

“S..S..Sure, sir.” Timothy said in a voice that could barely be heard.

Tamara sighed, this very well may be the longest walk and breakfast that she ever had.

17 thoughts on “Meet Me at the Clock”