I woke up this morning with a crick in my neck. Hurts to turn my head left. I slept really well, at least I thought I did. I must have had my head turned at an awkward angle or else was shaking my head a lot in my sleep. Who knows! Hopefully tonight will get it straight again!

With my neck pain I started thinking of animals with long necks. Can you imagine a giraffe getting a crick in their necks?

I wonder if swans ever have problems with their necks. Perhaps that is what makes them bite sometimes, their necks are aching! 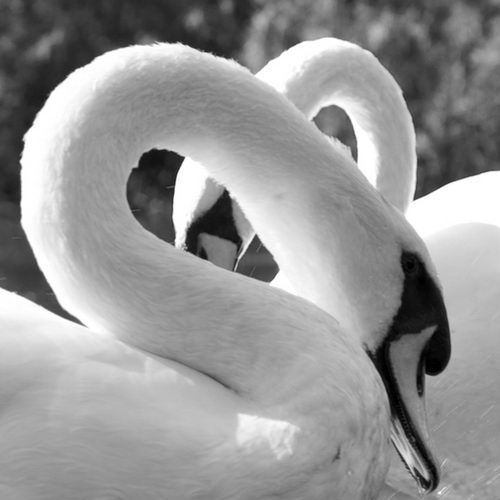 Do flamingos necks ever ache?

What about the poor ostrich ? What is his neck gets a crick when buried in the sand!

Yes, my neck may hurt, but I think I am better off than these animals, and better off than my husband! He likes to say that he gets a crick in his neck when he has to bend down to me. He is a little over a foot taller than me. I may get a crick in my neck when sleeping, but I don’t have to worry about bending! 🙂

When you back out of your parking space VERY SLOWLY, due to being a little too close to the shiny, black sports car beside you. Afraid of the magnetic pull once again!

Poetry expresses through words, the dance of your heart, anywhere from a happy jig to a tender waltz and all of the emotions in between!

Flowers are emerging from  hibernation,  bringing  beauty to the eyes, and the ocean is starting to call,  bringing one of the most beautiful sounds to my ear!

Another night, another trick, she walks with her head hung low. She wants to get out of this nightmare, but where can she safely go?

Many nights she just goes through the motions, with a heart void of emotions. She has become numb so that she can survive, she tries not to feel and not to think about who she has become.

The brave mask she keeps wearing, has been  worn so many times, it hides the frightened, crying girl inside.

Perhaps the mask she wears now is one that to her has become real. She simply forgets how being real feels.

Why is she involved in the sex trade? The reasons can be many,  but is a reason needed before one shows a heart that cares?

We may not always understand their story, but what keeps hitting me is the thought of why do we think we need to understand before we can care. Everyone needs compassion, and compassion should be freely given! Its not something that should only be shown if you understand every detail of how the person got in the situation that they are in.

We all have unspoken stories in our hearts and sometimes its through the simple act of compassion and listening that the mask can begin to fall, freeing the story inside of us.

The kids sat around the table reminiscing about the times when they were little, the games they played and the fun they had.

Our families got to know each other when our children were only toddlers. 4 toddlers running around, amidst us adults trying to have a conversation. Many conversations were interrupted with, “No, don’t touch that!, don’t throw that.”  or “Mommy we’re hungry, Mommy he hit me! ”

Many times of “No, I don’t want to go home, can we stay just 5 minutes longer?”  “Please let them stay!”, and 4 pairs of eyes giving you their best puppy dog faces!

We watched our children grow up together and we remember the first night when we realized that they  were old enough to all be left alone together for an evening.  No sitter was needed, while the four of us went out for dinner alone. It was quiet, we could hear ourselves think.

The kids were thrilled that we left them in charge, and loved the extra money given to order pizza.  We were happy for some peace and had joy when we came home and the house was still standing. A win-win situation, (though we do remember the broken window that one time!)

Sleepovers, birthday parties, graduations, time keeps passing and the friendship keeps growing stronger. We been through many joys and have shared many tears at the different paths that life has taken our families down. We have laughed until we cried and cried until we laughed. Oh the memories that friendship brings.

Happy Tuesday! May it be filled with a joy that is displayed in the above picture. Joy is contagious, so spread it around! Think of how many people you may be able to influence by reflecting joy to them.  Sing loud, and have a wonderful day! 🙂

from Pinterest (this picture was just too cute for me to pass by!)

Oops! It had happened again! Coco the squirrel  sometimes couldn’t keep the thoughts inside her head from coming out of her mouth. By the look on her Mama’s face, she realized that she better quickly scamper away this time.

“Hey Coco! How are you?” called Thumper to her friend, as she hopped up to Coco.

Coco shook her head with her cheeks puffed out.

“Wow! How many nuts do you have in there? Your cheeks look like they are going to explode!”

Coco shook her head again and suddenly her mouth opened and the nuts came falling out.

“What were you trying to do?”, asked Thumper.

“I thought if I stuffed my mouth full enough then I wouldn’t say things that get me into trouble!”

Thumper’s eyes twinkled as she said, “Uh-oh! What did you say now?”

Thumper was used to her friend getting into trouble, but she couldn’t help but laugh, for usually it was funny predicaments that Coco found herself in.

“Why don’t we go and find Flower, and maybe we can all play a game of hide and seek again.”

‘That sounds like fun.” said Coco. “Remember the last time we played and Flower’s tail was sticking out above the rock? ” she asked.

“Yes”, said Thumper, ” that was so funny when Milo the Monkey grabbed it not knowing it was Flower! He sure got a surprise! I remember seeing him washing in the river for a really long time!”

“Hey, if we play long enough perhaps my Mama will forget what I said when I go back home.” Coco told Thumper.

“She might”, replied  Thumper, ” but knowing you, it won’t be long until you are in trouble again!”

Thumper was laughing as she hopped away to find Flower and Bambi. Coco scampered after her throwing some nuts at Thumper’s back. Coco had to laugh too, for she knew from past history that most likely Thumper’s comment would prove to be true.

The fragrance of the Friendship Flower is the sweetest and it blooms in all seasons!

Watching a robin be persistent at pulling up a big, fat worm. Persistence pays off.  Spring has Sprung!

Ready for adventure? Every day holds a magic of its own, keeping your eyes open is the key!

Today was a good day for ducks! A dreary, rainy day, but you can always find smiles if you look for them, and these pics made me smile. I hope they do for the same for you, sometimes you just need to take a SMILE BREAK! Share something that makes you smile in the comments below. You can feel free to share captions for these pictures as well. All pictures are thanks to Pinterest, the site that has just about anything!

It was a calm night, the air was still. The only sounds that she so far had  heard, was the annoying chirping of the crickets. Clarissa stood there and waited as time seemed to stand still. She was waiting  for the sign, she knew it would come, but what was taking so long?

Everything was too still. Where was the giant flash in the sky?  She had hoped that she would see a shooting star.  Not one shooting star though did she see amidst so many of the other stars in the night sky.

A shooting star surely would be a sign that she was doing the right thing, making the right decision.  Perhaps she would get serenaded by the call of the nightingale. It would also be such a delight to hear a hermit thrush sing, that could be her sign.

With anticipation she strained her ears to hear. She  heard a sound, but it was far from melodic. Where was it coming from?  Clarissa  turned and saw the swamp in the distance  and the shadow of the heron, it had one of  the most raspiest  calls she had ever heard. It hurt her ears.

Sighing, she hung her head, this wasn’t working. She had come out into nature to find an answer but it appeared futile. No shooting star, no rolling thunder, no beautiful birds singing, just a raspy heron and bull frogs croaking.

“Whooo-whooo- ”  Clarissa looked up and saw a  barn owl perched up high in a tree.

She shook her head in despair. . Not “who-who” she thought to herself,  her heart was asking where-where? Where was the clear sign to the answer she sought? Clarissa turned around, frustrated, she headed home wondering why she had come out tonight.

The stars were out in the bright night sky and the air was still as Pamela stared at the glorious sight.  Millions of stars twinkling above her, and the crickets symphony she heard. She took in a deep breath of the fresh air and felt peace surround her.

No nightingale’s did she hear, but  what was making that sound. It was unique, she hadn’t heard it before. She took a little walk over towards the swamp where the sound was coming from and then she saw it. It was a Black-crowned night heron. How cool to see one of them!

She sat down on a log to watch it call out to its mate with a raspy voice. The bullfrogs joined him in a croaky chorus and she couldn’t help but smile. The heron and bullfrogs were calling out as loudly as they could. They may not sound as sweet as the hermit thrush, but they didn’t care. Slowly Pamela started singing a song of her own. One that she usually sang in the privacy of her room, wanting no one else to hear.

After singing she sat there for awhile lost in her thoughts. She was so glad had come out tonight to clear her head. She felt refreshed from the decision that had been weighing her down, she just  had to be alone with her thoughts for awhile.

As she started to head back home,  she heard “Whooo-Whoooo..”  Oh, how her heart jumped at the sight of the beautiful Barn Owl perched high in the tree. Her eyes  watched it as it spread out its wings. She gasped at its beauty taking flight into the night.

Pamela’s heart was full. A clear answer she may not have, but she felt more confident and trusted that in time her answer would come.

She sighed with contentment, continuing her walk and listening to her heart speak.

Happy Tuesday! What is on your mind today? The fact that in a week’s time I will have a 20 year old child has been on my mind. How does time keep flying and how do my children keep getting older, when I am staying young? 🙂  I am very blessed to be a Mother and I just try to keep cherishing the moments.

May you cherish the moments as well that happen in life, even the ones that you think are small.