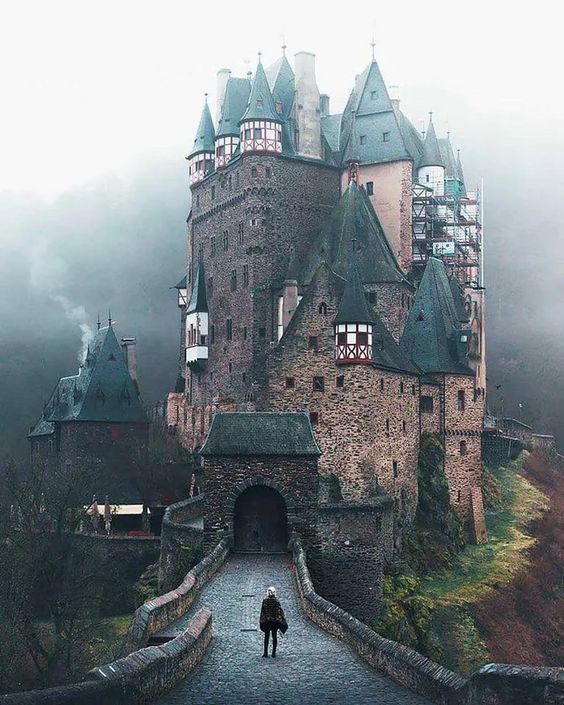 She stopped right before the castle door. Who lived in this majestic castle?  Would they let her in? Her car had broken down and there were 2 guys that stopped to help her but they sure didn’t seem to know what they were doing. They rode up in a police car, but she greatly wondered if they really were cops, for when she asked to see their ID, she got shown 4 separate ID’s.  They had 2 each.

The one guy offered to look under the hood of her car, but he forgot to prop open the hood and it clunked him on the head. The other guy pulled out her spare tire and they tried to put it on for her, but it was like watching Laurel and Hardy. She had trouble holding back her laughter as humor danced in her eyes while watching them. They were sweet, but they didn’t have a clue as to what they were doing. She thanked them kindly and then sent them on their way, assuring them that she would go find help at this castle that she had spied down the road.

Now she wondered if she had done the right thing, but she couldn’t turn back time now,  so she bravely knocked on the door.

Who would come to the door she wondered as she timidly waited. She had always wanted to see inside a castle, now perhaps she would have her chance.

Was anyone going to come, had they heard her knock, she started swaying from side to side as she was growing curiouser and curiouser  by the minute.

Oh she heard footsteps coming, her heart began to thump as the door slowly swung open and …

32 thoughts on “The Secret Castle”